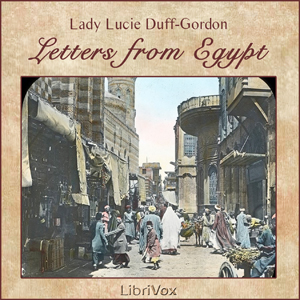 As a girl, Lady Duff-Gordon was noted both for her beauty and intelligence. As an author, she is most famous for this collection of letters from Egypt. Lady Duff-Gordon had tuberculosis, and went to Egypt for her health. This collection of her personal letters to her mother and her husband. By all accounts everyone loved her, and the letters are very personal in style and content. The letters are as much an introduction to her person as a record of her life on the Upper Nile. (Summary by Sibella Denton)

Reviewer: Timothy Ferguson - favoritefavoritefavoritefavorite - October 20, 2011
Subject: An excellent, if melancholy book
Asa series of letters, and perhaps a travelogue, the listener needs to go into the book knowing that it does not have a plot, like fiction. Instead it has development of the many characters who are met by the writer.

It is not a spoiler to state that she dies slightly after the end of the book; this is mentioned in the prologue, and, since as non-fiction there cannot be a plot as such, instead the core arc of the book is the writer gradually coming to the realisation that her travel to Egypt to seek a cure for consumption is failing, and then has failed, and that she will die in a foreign land, but surrounded by friends.

This adds an increasingly melancholy tone to the book, but the writer was careful to square away the financial and personal interests of her servants before she died, so these supporting characters have complete stories.

So, and excellent book, on its own terms. If you can't handle the narrator slowly coming to accept her death, then perhaps a recording of a book by her friend, A. B. Edwards, called "A Thousand Miles up the Nile" might suit you better, as they are similar. This author, however, is far warmer to the locals, and gets to know them far better than other Westerners, as she depends on them more due to her illness, and because, being less wealthy, she treats them more like people and less like servants.

Uploaded by librivoxbooks on December 9, 2007